Why Lincoln and Churchill Would be Unelectable Today 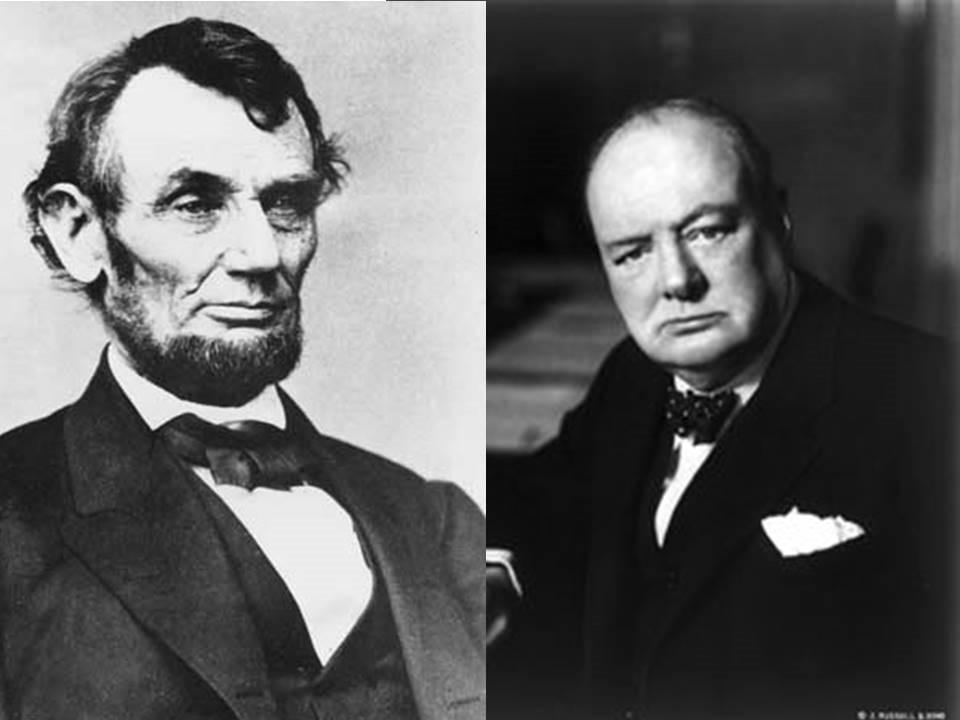 Would the United States have been united without Abraham Lincoln? Lincoln’s undeniable empathy, compassion, and pragmatic persistence were key factors in achieving lasting social change.

What would the political landscape of Europe be like today without Winston Churchill? After World War II, Winston Churchill alone emerged as the great leader, the wartime strategist, and the deliverer of democracy.

Despite the extraordinary leadership and legislative achievements of both men, sadly I don’t think they would be elected today because they lived with a mental illness. This view is shared by former representative Patrick Kennedy (son of senator Ted Kennedy), and former UK Prime Minister Tony Blair’s chief advisor Alastair Campbell. I interviewed Kennedy and Campbell for my book Back From The Brink about their own struggles in the crucible of politics.

We think that Lincoln (who suffered from depression) and Churchill (who struggled with bipolar disorder) would be unelectable, because the symptoms and behaviours of their conditions would not play well with the demands of today’s 24/7 news cycle and ready availability of information about someone’s past.

When you consider the substandard leadership being demonstrated by both parties in Australian politics today, the realization that leaders of the calibre of Lincoln and Churchill would be unelectable is quite frankly, depressing.

Patrick Kennedy, who had his own breakdown whilst in Congress in 2006, shared with me for the first time that he was not the only family member that struggled with mental health issues. He revealed that while his mother suffered from alcoholism and bouts of extreme depression, his father, the late senator Ted Kennedy, “clearly suffered profound post-traumatic stress” following the assassinations of his brothers, President John F. Kennedy and Senator Robert F. Kennedy. Although Ted Kennedy was obviously struggling to cope with PTSD triggers (such as cars backfiring), he did not believe it was politically acceptable to discuss such a “weakness” openly, and often resorted to self-medicating with alcohol.

Patrick relates to this, because even when he was helping to guide the Mental Health Parity and Addiction Act through government, he did not want to seek help for his distress, because of the stigma associated with addiction and bipolar disorder.

With this insight, when asked about the electability of Lincoln and Churchill, Patrick lamented “I don’t think our political system would allow it because every detail of people’s past and their behaviours are dissected. Unfortunately we get pigeon-holed so fast.”

If he lived today, would Lincoln have been pigeon-holed in this way?

According to Joshua Wolf Shenk in his book Lincoln’s Melancholia, in 1835, Lincoln’s teacher Mentor Graham reported that Lincoln “told me he felt like committing suicide often” and another local villager reported that “Lincoln was locked up by his friends… to prevent derangement or suicide.”

As Kennedy highlights, this is hardly the stuff that could be hidden from a Google or Twitter search today.

On the other side of the Atlantic, Alastair Campbell rose to extraordinary influence within Tony Blair’s Labour Party between 1994 and 2003. He was a major contributor to UK policy and was a key figure in relations between the United Kingdom and the United States during that period. Campbell had his own mental health challenges and struggled with depression, but only after he left his full-time role in government did he seek help and see a psychiatrist.

Despite Churchill’s achievements he struggled with bipolar disorder. In Professor Nassir Ghaemi’s book A First Rate Madness, several of these episodes are chronicled. In 1910 Churchill told his doctor Lord Moran  “For two or three years the light faded from the picture. I sat in the House of Commons, but black depression settled on me.” He also confided thoughts of suicide to his doctor “I don’t like standing near the edge of a platform when an express train is passing through. I like to stand right back and if possible get a pillar between me and the train.”

He was also prone to mood swings with his military Chief of Staff General Ismay saying “He’s either on the crest of a wave, or in a trough…There are no half measures in his make up.”

Probably because of these mood fluctuations, Churchill also had highly unusual work practices. He would routinely sleep in the afternoon, and then stay awake late into the night, often beyond midnight.

It is these unorthodox working hours that Campbell believes would be difficult for today’s media and public to accept. He says bluntly, “I can’t see that the press or the public would tolerate him having one of those days when he couldn’t get out of bed until two in the afternoon. I can just see a reporter outside 10 Dowling St in a live report saying, “We’ve heard the prime minister is still not up. We’ll take the weather then we’ll go back and find out if he is out of bed yet.” Campbell believes “that the workload of modern leaders has increased because of the internet and a relentless media.”

Ironically, Ghaemi believes that it was because Lincoln and Churchill struggled with mental illness and significant adversity for most of their lives, that they were able to develop the qualities of realism, empathy, and resilience.

When asked directly whether he believes that Lincoln and Churchill would be electable today, Ghaemi is not quite as pessimistic as Kennedy or Campbell. Whilst agreeing that it is hard to imagine Churchill’s direct and abrasive manner winning over his colleagues, the media, and the public in today’s political environment, he is more optimistic about Lincoln. He thinks Lincoln’s self-depreciating humour and inspiring speeches would still be very attractive to today’s voters although adding a note of caution “I’m not as confident the electorate would be as forgiving for someone who openly admitted to be suicidal.”

What can be done to make sure we don’t miss the next Lincoln or Churchill?

Kennedy and Ghaemi believe the next focus of the civil right movement should be to eliminate mental illness stigma. To build momentum, they believe that those who live with a mental illness need to accept that those illnesses also have advantages, and with the realization that adversity can lead to benefits, will come the confidence to champion change.

Campbell adds another insight, “I know from my own experience how important leadership is in the process of eliminating stigma. When Tony Blair asked me to work for him in 1994, I told him about my breakdown and my drink problem. He said he wasn’t worried. If a Prime Minister can have that attitude, we can all follow suit and make a difference.”

Graeme Cowan is the author of book Back From The Brink: true stories & practical help for overcoming depression and bipolar in which he interviewed extensively Patrick Kennedy, Alastair Campbell and others. He also interviewed Professor Nassir Ghaemi in preparing this article. www.IamBackFromTheBrink.com

Let’s face it, work has been very challenging for many of us in the last year. Recent ...
END_OF_DOCUMENT_TOKEN_TO_BE_REPLACED
News

Uncertainty can cause more stress than actual pain. Science tells us that we humans are ...
END_OF_DOCUMENT_TOKEN_TO_BE_REPLACED
News

These are the top 5 things leaders should focus on to prevent employee burnout (Gallup ...
END_OF_DOCUMENT_TOKEN_TO_BE_REPLACED
News

Do you think your team members would like to work in the office, work from home, or work ...
END_OF_DOCUMENT_TOKEN_TO_BE_REPLACED
News

In 1976, Professor Carlo Cipolla, an economics professor at the University of California ...
END_OF_DOCUMENT_TOKEN_TO_BE_REPLACED
General

Our Federal Parliament has been inundated with graphic accounts of misogyny, sexual ...
END_OF_DOCUMENT_TOKEN_TO_BE_REPLACED
General

I recently visited beautiful Forster, on the NSW mid-north coast. Having grown up in Taree...
END_OF_DOCUMENT_TOKEN_TO_BE_REPLACED
News

Do you consider yourself to be a caring leader? Self-care and caring for others in your ...
END_OF_DOCUMENT_TOKEN_TO_BE_REPLACED
News

Asking R U OK? can be scary. What if the other person replies with a “No”. ...
END_OF_DOCUMENT_TOKEN_TO_BE_REPLACED