What The Kokoda Trail Taught Me About Resilience 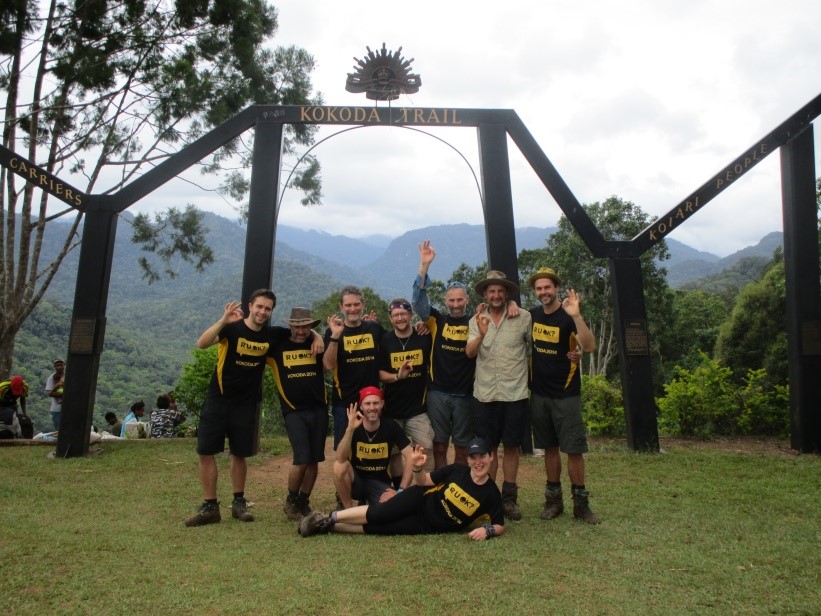 Recently I emerged from a 9 day trek along the Kokoda Trail in Papua New Guinea, made famous in WWII by a prolonged battle between Australian soldiers and the Japanese. I didn’t know it when I began, but I was to learn more about leadership resilience in this period than in the 10,000 hours studying the subject in the previous 8 years.

When Brendan Maher our GM of R U OK?, proposed to the Board that we organise a Kokoda Trail Fundraising event I immediately thought “what a great idea”.

I invited some friends, and was delighted when John, Bernie, and my 20 year old son Adam decided to join myself and five others on the walk.

The first paragraph in the orientation booklet we received was ominous. It said that over a 3 week period in 2009, 30 people were evacuated because they were ill prepared for the trek. Maybe we should take this seriously.

We flew to Port Moresby for an overnight stay, and then rose at 4am the next morning to prepare for a short flight over the Owen Stanley Ranges to Popondetta. As I looked down from the plane, I was alarmed by the steepness of the mountains, and by the realization that we would spend the next 9 days retracing the path of this 25 minute flight.

After landing, we commenced a 2 hour journey to Kokoda village along possibly the bumpiest road I have ever been on. I wear a LifeTrak watch which also serves as a pedometer, and even though I was sitting for the entire journey, it indicated at the end that I had taken 22,000 steps!!

We met our crew and porters and began a 2 hour walk to an idyllic campsite called Hoi where there were 2 intersecting streams.  I thought to myself, “maybe this Kokoda Trail isn’t so tough.” Was I ever wrong!! 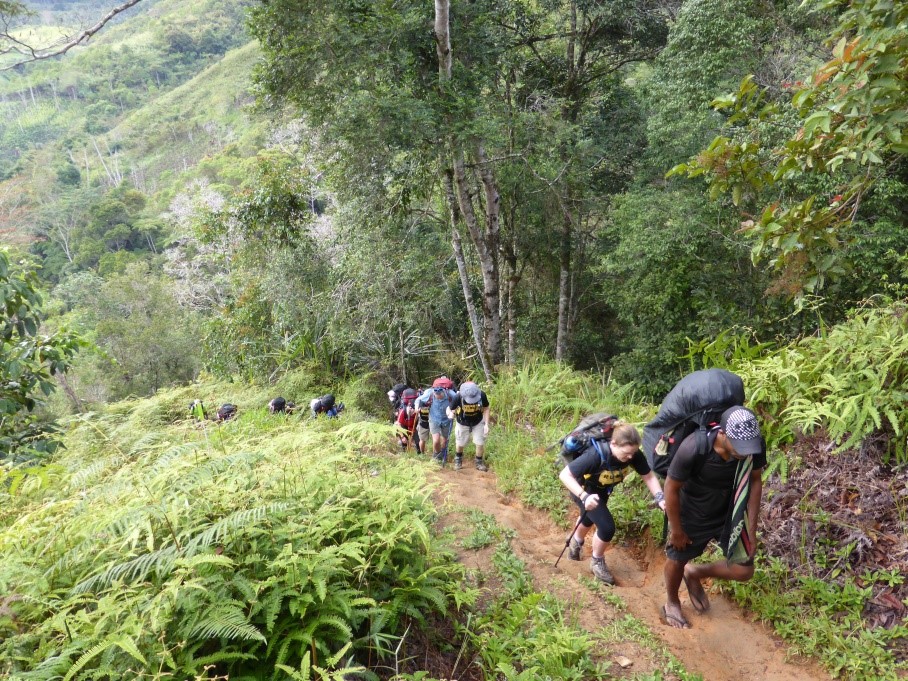 At 6am the next morning everything changed, and we commenced our first brutal climb. The theme of relentless up, followed by relentless down was continual, but it wasn’t what made the Kokoda the toughest physical challenge I have ever done.

What made it the supreme test was the steepness compounded by the mud and slipperiness of the trail, and coverage by countless uneven tree roots. You literary had to concentrate every step you took, or risked falling and injuring yourself.

That night we arrived at Isurava where another huge battle took place. Once again the Australians fought bravely but were massively outnumbered by 6-1, but somehow managed to hold their position for a long time. A beautiful but simple memorial has been built here with 4 granite pillars which highlight the values of the Kokoda Spirit – Courage – Endurance – Mateship – Sacrifice. 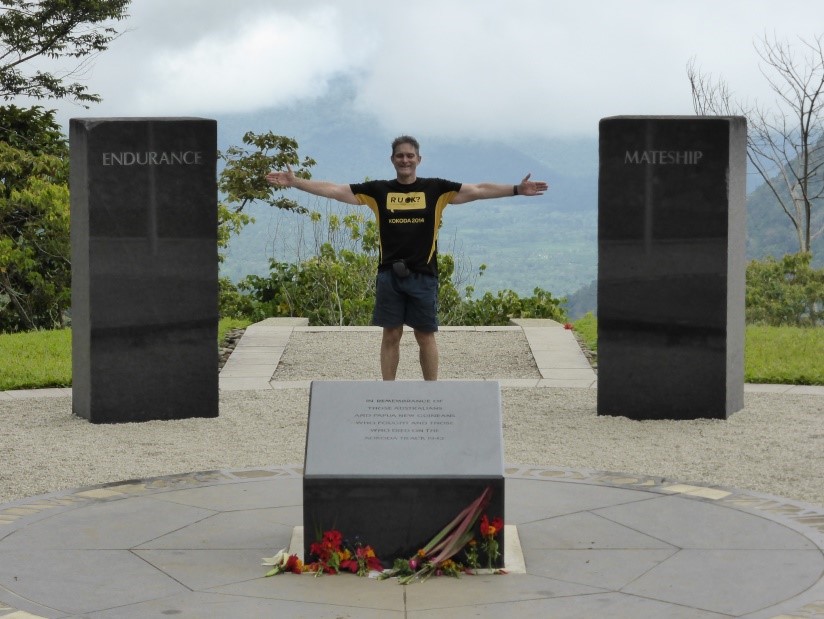 Out tour leader Thom gave a very moving memorial service where we all recalled the extraordinary sacrifice and loss of life here, and read the Ode of Rememberance.

We were in awe of their achievements. We were having 3 meals per day, and slept peacefully each night, and still struggled enormously each day. They were starving, under 24/7 threat, riddled with malaria and dysentery, and forced to lie in mud for days on end, defending their territory.

As we followed their steps it was like we subconsciously took on their values. Incredible mateship, support, and encouragement became the norm. Amazingly honest conversations occurred, and a deep respect for each other and why we were here. Something extraordinary happened without the distraction of phones, electricity, internet, or media of any kind. We talked a lot.

The hours and hours of walking created lots of time for lots of reflection. My admiration for these diggers was immense. The majority were militia – many of them farmers – who had only received rudimentary training.  Most of our experienced soldiers were far away fighting in Europe.

As I walked an African Proverb kept coming to mind:

I thought about how these amazing young men who were bound by a common mission and values had overcome insurmountable odds.

I thought about our own much more humble tribe and mission, and how we wouldn’t have been able to do it without Thom, our trek leader, or without the help of our porters who provided incredible support and carried most of our gear. I also know that I wouldn’t have made it without the camaraderie, jokes, trivia, movie discussions, friendly sledging and encouragement of my fellow trekkers.

I also reflected on the history of R U OK?, and how much had changed since I first met our founder Gavin Larkin in 2009. At the beginning we had no money and no employees, but a small committed group of us with a shared vision had rapidly built the reach and impact of Gavin’s dream. Now 6 years after the launch, it was gratifying to know that 66% of Australians were aware of our movement, and 1 in 5 of those had been motivated to ask someone “Are you OK?”.

Gavin tragically passed away from cancer in 2011, but I couldn’t help but reflect on how proud he would be of our progress, and how much he would have loved to have been on the Kokoda Trail with us.

I also reflected on my own life – there is a lot of time for thinking when you walk 25,000 steps every day. I recalled that 10 years before I had written a suicide note to my family and attempted to take my own life. Through the help, support, and encouragement of many people I had come back from the brink, and felt proud of the difference my work was making.

But most of all I was humbled by the extraordinary achievements and sacrifice of those diggers. This is brought to stark focus by the Bomana War Memorial where over 3000 Australians are buried. 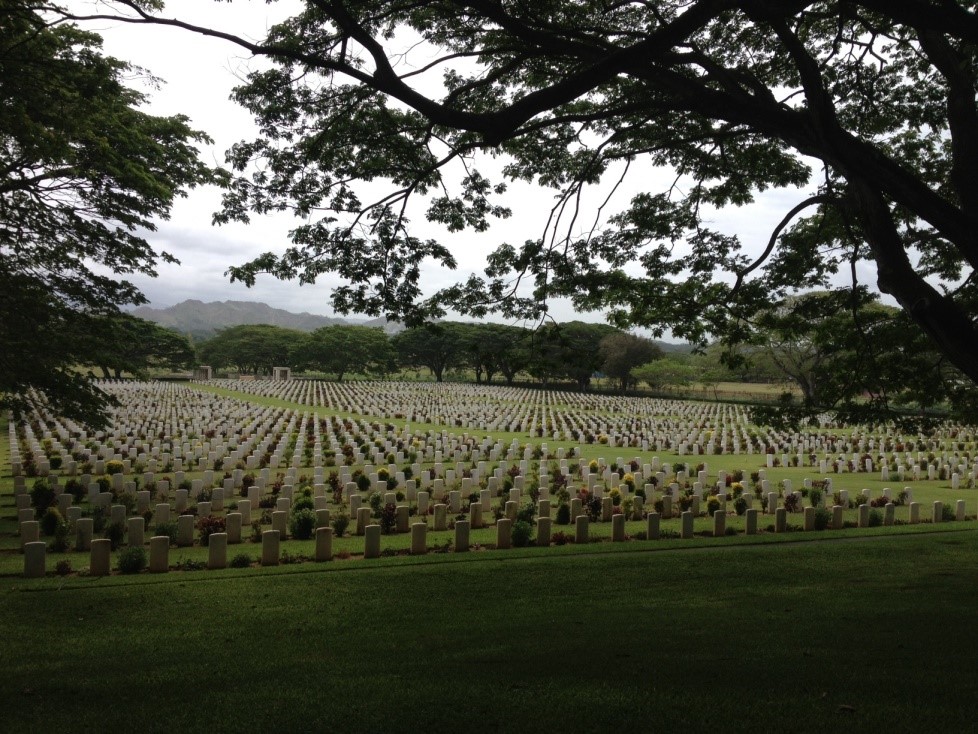 Most of the headstones were inscribed with the ages of the soldiers, and it was a sobering realization that most of them were in their early 20’s, the same age as my son Adam. I thought of all those mothers, fathers, brothers and sisters who received the unimaginable message that their boy would not be returning home.

I cannot describe the exhilaration we felt as we emerged through the arches of Owers Corner. The porters formed a guard of honour for us, and then we reciprocated for them. It was by far the toughest physical challenge I had ever completed, but I felt euphoric and content.

So what did the Kokoda Trail teach me about resilience?

As we drove back to Port Moresby, I reflected on our trek, our group, the diggers, the history of R U OK?, my life, and what I learnt from this amazing experience, and I came to a conclusion.

If you want to achieve the extraordinary, tribes trump self. If you want to overcome insurmountable obstacles, a tribe with a common purpose and values will always prevail.

If you want to go far, tribes trump self.

We must all build tribes around us in our work and our personal life if we want to outperform, outlast and outmanoeuvre.

To view an amazing short video by my son Adam about our 9 day adventure click here.

Graeme Cowan is a speaker and author who helps leaders build their resilience and performance and create thriving tribes.

Let’s face it, work has been very challenging for many of us in the last year. Recent ...
END_OF_DOCUMENT_TOKEN_TO_BE_REPLACED
News

Uncertainty can cause more stress than actual pain. Science tells us that we humans are ...
END_OF_DOCUMENT_TOKEN_TO_BE_REPLACED
News

These are the top 5 things leaders should focus on to prevent employee burnout (Gallup ...
END_OF_DOCUMENT_TOKEN_TO_BE_REPLACED
News

Do you think your team members would like to work in the office, work from home, or work ...
END_OF_DOCUMENT_TOKEN_TO_BE_REPLACED
News

In 1976, Professor Carlo Cipolla, an economics professor at the University of California ...
END_OF_DOCUMENT_TOKEN_TO_BE_REPLACED
General

Our Federal Parliament has been inundated with graphic accounts of misogyny, sexual ...
END_OF_DOCUMENT_TOKEN_TO_BE_REPLACED
General

I recently visited beautiful Forster, on the NSW mid-north coast. Having grown up in Taree...
END_OF_DOCUMENT_TOKEN_TO_BE_REPLACED
News

Do you consider yourself to be a caring leader? Self-care and caring for others in your ...
END_OF_DOCUMENT_TOKEN_TO_BE_REPLACED
News

Asking R U OK? can be scary. What if the other person replies with a “No”. ...
END_OF_DOCUMENT_TOKEN_TO_BE_REPLACED