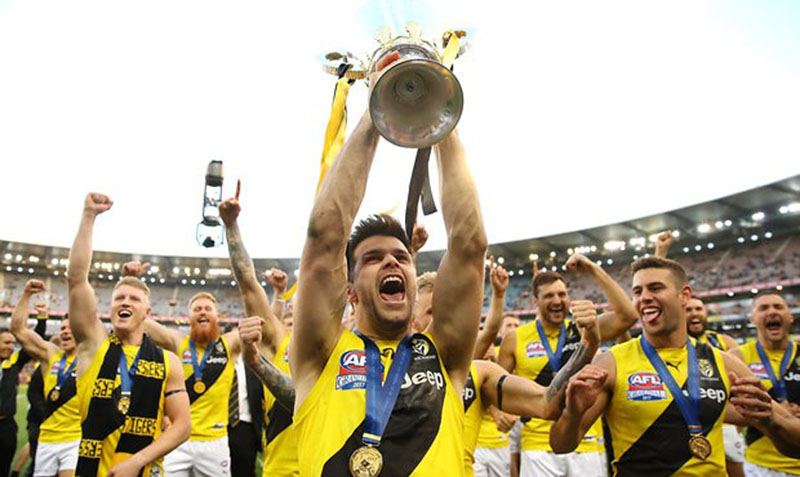 In 2016 the Richmond Tigers were having a terrible year. For the coach Damien Hardwick, it became a crisis, as many speculated that he would be sacked. He liked to get close to his players, but as he searched for solutions to their woes, he found himself focusing more on statistics and micromanaging the players. The more he focused on improving performance the higher his and the players stress became.

It got to the point where his wife told him “you are not the man I married”. Hardwick realized that if things were going to change he would have to change.

At the start of 2017 he decided to initiate a session with all players and coaching staff called the Triple H Sessions: Hardship, Highlights, and Heroes. In these sessions each person shared something deeply personal to them under those three categories. When someone shared something the total focus of the group was on that person.

Damien Hardwick was first and he set the tone, followed by captain Trent Cotchin and the Tigers’ senior leaders. Each speaker would nominate someone to follow.

All the players who stood in front of the group shared something special and unique to them. When they shared these things interpersonal relationships and trust began to rise. You don’t share something that is personal if you don’t have trust, and that is something that every player did.

Players old and young opened their hearts to teammates with eyes always fixed on whoever was speaking in the players’ auditorium. Many were emotional. Some shared losing someone dear to them. The sessions created more conversations between players, coaches and staff, and deeper connections were made.

They also included an initiative where each player was given $5 and told to go out to have a coffee with someone in the team they didn’t know very well.

Brandon Lewis, a Richmond player said this about the outcomes of those sessions “There’s so much love for each other. We stay positive, we stick tight, we don’t let anything in the cracks, or anyone inside our heads. And we know our best footy together is good enough to beat anyone.”

Hardwick didn’t hear about the Triple H exercise from another coach. He read about it in a book by Jon Gordon, an American leadership expert. The book was called You Win in the Locker Room First, and it featured many of the methods used by Atlanta Falcons coach Mike Smith, who led that franchise through one of the most striking turnarounds in NFL history. The Triple H exercise has also worked with everyone from the Clemson University football team to the UCLA women’s basketball program.

Although Hardwick didn’t label it this way, what he was doing was increasing the psychological safety in the Richmond team. Professor Amy Edmondson from Harvard Business School defines psychological safety as “a team climate characterized by interpersonal trust and mutual respect in which people are comfortable being themselves.”

I shared in an earlier article that Google discovered that the number 1 predictor of their best teams was psychological safety. Although psychological safety is critical for high performance, it is also fragile. The wrong response by a leader or a competitive co-worker can squash it before it has a chance to flourish.

We become more open-minded, resilient, motivated, and persistent when we feel safe. Humor increases, as does solution-finding and divergent thinking — the cognitive process underlying creativity.

Let’s face it, work has been very challenging for many of us in the last year. Recent ...
END_OF_DOCUMENT_TOKEN_TO_BE_REPLACED
News

Uncertainty can cause more stress than actual pain. Science tells us that we humans are ...
END_OF_DOCUMENT_TOKEN_TO_BE_REPLACED
News

These are the top 5 things leaders should focus on to prevent employee burnout (Gallup ...
END_OF_DOCUMENT_TOKEN_TO_BE_REPLACED
News

Do you think your team members would like to work in the office, work from home, or work ...
END_OF_DOCUMENT_TOKEN_TO_BE_REPLACED
News

In 1976, Professor Carlo Cipolla, an economics professor at the University of California ...
END_OF_DOCUMENT_TOKEN_TO_BE_REPLACED
General

Our Federal Parliament has been inundated with graphic accounts of misogyny, sexual ...
END_OF_DOCUMENT_TOKEN_TO_BE_REPLACED
General

I recently visited beautiful Forster, on the NSW mid-north coast. Having grown up in Taree...
END_OF_DOCUMENT_TOKEN_TO_BE_REPLACED
News

Do you consider yourself to be a caring leader? Self-care and caring for others in your ...
END_OF_DOCUMENT_TOKEN_TO_BE_REPLACED
News

Asking R U OK? can be scary. What if the other person replies with a “No”. ...
END_OF_DOCUMENT_TOKEN_TO_BE_REPLACED