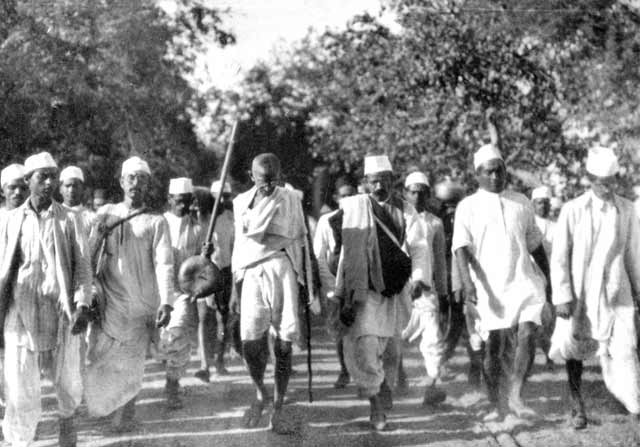 Few leaders have achieved greater change than Mahatma Gandhi. It was not just the scope of the change he was able to help facilitate; it was also the way that he went about it. Martin Luther King Jnr., Nelson Mandela, and the Dalai Lama were some of the extraordinary leaders that nominated him as a major source of inspiration.

From being born in 1869 as the youngest of four children into modest wealth, he became central to India achieving independence from the British Empire in 1947. Along the way he was married at 13, left India to study law in London, failed as a lawyer in India, moved to South Africa for 21 years where he worked as a lawyer and social justice advocate, announced to his wife he was becoming celibate at 37, returned to India at 45, and then began to work relentlessly to achieve freedom and democratic rule for the 200+ million Indians who were overseen by 100,000 British. India was a huge source of wealth for the British so they were very reluctant to relinquish control.

The first television interview of him in 1931 shows a shy and introverted man, who seems anything but charismatic. The contrast with today’s political leaders couldn’t be greater, where the capacity to deliver enthusiastic three word sound bites seems to be considered essential.

What was so special about Gandhi?

Gandhi was a prolific writer but perhaps the greatest testament of his leadership was how he lived. Indira Gandhi, who went on to become Prime Minister of India, said of him, “more than his words, his life was his message.”

There are 3 key themes that come through in Gandhi’s success as a change champion:

“The best way to find yourself, is to lose yourself in the service of others.”

“There go my people. I must follow them, for I am their leader.”

Ghandi’s driving motivation was to serve others and this was a consistent theme throughout his life. Rather than see himself as different, he always strove to understand what we all have in common. In Jim Collins book Good to Great he researches organisations that have gone from average to great performance for at least 15 years. One of the key success factors for these organisations was having a CEO as a Level 5 leader. Collins explains that this style of leader is motivated more by their team and organisation’s success than their own.

Although “love” may seem an unusual word in today’s workplace, people respond incredibly well to a caring leader. After researching employee engagement for 40+ years, Gallup has found that agreement with the statement “I have a supervisor or someone at work, who seems to care about me as a person,” is the most correlated with an employee’s commitment to the organisation.

Organisations where care prevails are shown by Gallup to have higher productivity, customer service levels, and employee retention.

“Be the change you wish to see in the world.”

Perhaps no greater summary of Gandhi’s greatness was his insistence that he needed to change, if he expected others to change. One anecdote that highlights this was when a mother came to him and asked if he would encourage her son to give up his addiction to sugar. Gandhi asked her to come back in 2 weeks when he would speak to her son. She came back in two weeks and he encouraged the boy to give up sugar which he agreed to do. The mother thanked Gandhi but then asked him why he waited two weeks to deliver the message. He replied, “upon your visit two weeks ago I too was eating sugar.” He explained he could not speak to her son about giving up sugar unless he had done it also.

The message for business could not be clearer. In a study highlighted in in the book Beyond Performance by Scott Keller and Colin Price, a startling finding was that 70% of change efforts failed to achieve all their objectives. When assessing why change failed, 33% of the time it was attributed to “management behaviour not supporting the change” – the second most common cause.

“The main purpose of life is to live rightly, think rightly, act rightly. The soul must languish when we give all our thought to the body.”

Once more Gandhi highlights that great things can be achieved only when we start with our self.

This is the introduction to Gandhi’s autobiography The Story of My Experiments With Truth.

This shows his deep commitment to the freedom cause, but also reveals he will not sacrifice his beliefs to achieve it.

3. Inspiring Others to Change

“A ‘no’ uttered with the deepest conviction is better and greater than a ‘yes’ merely uttered to please, or what is worse, to avoid trouble.”

Understanding and empathising with the other perspective is critical to achieving pragmatic solutions. Many change efforts fail when people disagree with something but don’t tell anyone, and sabotage initiatives passively.

“There will have to be rigid and iron discipline before we achieve anything great and enduring, and that discipline will not come by mere academic argument and appeal to reason and logic. Discipline is learnt in the school of adversity.”

Persistence is omnipotent. When Gandhi began the liberation journey very few thought he had any chance to succeed.

In another book by Jim Collins called Great By Choice, he researches companies that have been extremely successful in highly volatile industries like airlines, semi-conductors and internet stores. Collins found that one of the three critical success factors these outlier organisations shared was “fanatical discipline”.

“An ounce of practice is worth more than tons of preaching.”

Nothing shows greater commitment to a new direction than actually taking the first step.

“I suppose at one time leadership meant muscles; but today it means getting along with people.”

“The weak can never forgive. Forgiveness is the attribute of the strong.”

All of these quotes demonstrate a deep commitment to listening, empathy, awareness and persuasion. They also highlight a remarkable commitment to the greater good.

“I look only to the good qualities of men. Not being faultless myself, I won’t presume to probe into the faults of others.”

Gallup research now shows that people that use their top 5 strengths everyday are 600% more likely to be engaged at work and 300% more likely to report high life satisfaction. If you are a leader and ignore someone there is a 40% chance they will be disengaged, if you focus on their weaknesses a 22% chance, but if you focus on their strengths only a 1% chance of disengagement.

Gandhi’s words ring true intuitively and it is fascinating that business and organisational research now quantifies and proves their worth for successful change.

Graeme Cowan is a speaker and author who helps leaders and their tribes to build resilience, wellbeing, and performance. To inquire about Graeme speaking at your conference or workplace email support@graemecowan.com.au

“Graeme’s 4.55 out of 5 speaker’s rating by participants was well and truly deserved.”
– Peter Westlund, Director, Institute of Management Consultants

“Graeme delivered one of the most compelling presentations I have seen. His story and research provides deep credibility and impact about the necessity to enhance team performance AND collective mood. He and his message are relevant for any workplace experiencing change, and have had a lasting impact on my group. Highly recommended.”
– David Banks, General Manager Business Performance, National Australia Bank

Let’s face it, work has been very challenging for many of us in the last year. Recent ...
END_OF_DOCUMENT_TOKEN_TO_BE_REPLACED
News

Uncertainty can cause more stress than actual pain. Science tells us that we humans are ...
END_OF_DOCUMENT_TOKEN_TO_BE_REPLACED
News

These are the top 5 things leaders should focus on to prevent employee burnout (Gallup ...
END_OF_DOCUMENT_TOKEN_TO_BE_REPLACED
News

Do you think your team members would like to work in the office, work from home, or work ...
END_OF_DOCUMENT_TOKEN_TO_BE_REPLACED
News

In 1976, Professor Carlo Cipolla, an economics professor at the University of California ...
END_OF_DOCUMENT_TOKEN_TO_BE_REPLACED
General

Our Federal Parliament has been inundated with graphic accounts of misogyny, sexual ...
END_OF_DOCUMENT_TOKEN_TO_BE_REPLACED
General

I recently visited beautiful Forster, on the NSW mid-north coast. Having grown up in Taree...
END_OF_DOCUMENT_TOKEN_TO_BE_REPLACED
News

Do you consider yourself to be a caring leader? Self-care and caring for others in your ...
END_OF_DOCUMENT_TOKEN_TO_BE_REPLACED
News

Asking R U OK? can be scary. What if the other person replies with a “No”. ...
END_OF_DOCUMENT_TOKEN_TO_BE_REPLACED