Two weeks ago I was speaking to an impressive Human Resources Manager before I was about to speak about the why mental resilience should be on every CEO’s agenda. I shared with her that I had recently asked 520 people questions about mental health stigma in workplaces.

I explained that my finding showed that people in mental distress were reluctant to admit it to their manager or colleagues. She shared with me that even though she struggled at times with anxiety, she would be reluctant to reveal this to her manager. She said that she feared being negatively judged or pigeonholed. She quietly said, “It’s just too risky”.

I believe this is profoundly wrong for both the employee and the employer when you consider the ABS estimates that 45% of us will struggle with a mental illness in our lifetime. There is also clear evidence that this is high priority for all employees.

In a just-released Superfriend research of 5000 employees, 46% believe mental health and wellbeing is a big problem in their business. Of these, only 20% believe it is being addressed, with 50% believing it is not a high priority. In that same report 1 IN 3 believe that stigma prevents employers taking action to promote mental health and wellbeing in the workplace. We must address this.

In September 2017 I invited people to answer squestions about the stigma and stress in their workplace. Overall 520 employees responded – full time (59%), self-employed (14%), part-time (14%) from a mix of small, medium, and large employers. I was also interested to see if there was a different perspective between those who have experienced a mental health challenge at work (71% of those surveyed) and those who hadn’t 29%.

Overall, only 57% of employees agreed that their stress at work is manageable.  With unmanageable stress a contributor to depression and anxiety this level remains unacceptably high.

The study also revealed that mental health stigma is greater in larger companies, and its impact is perceived more significant by those who have had a mental health challenge at work versus those that haven’t.

Let’s look at this in general and the difference between large and small companies.

In larger organisations (100+ employees) only 41% believe employees with a mental health challenge are regarded negatively compared to 60% for smaller companies. 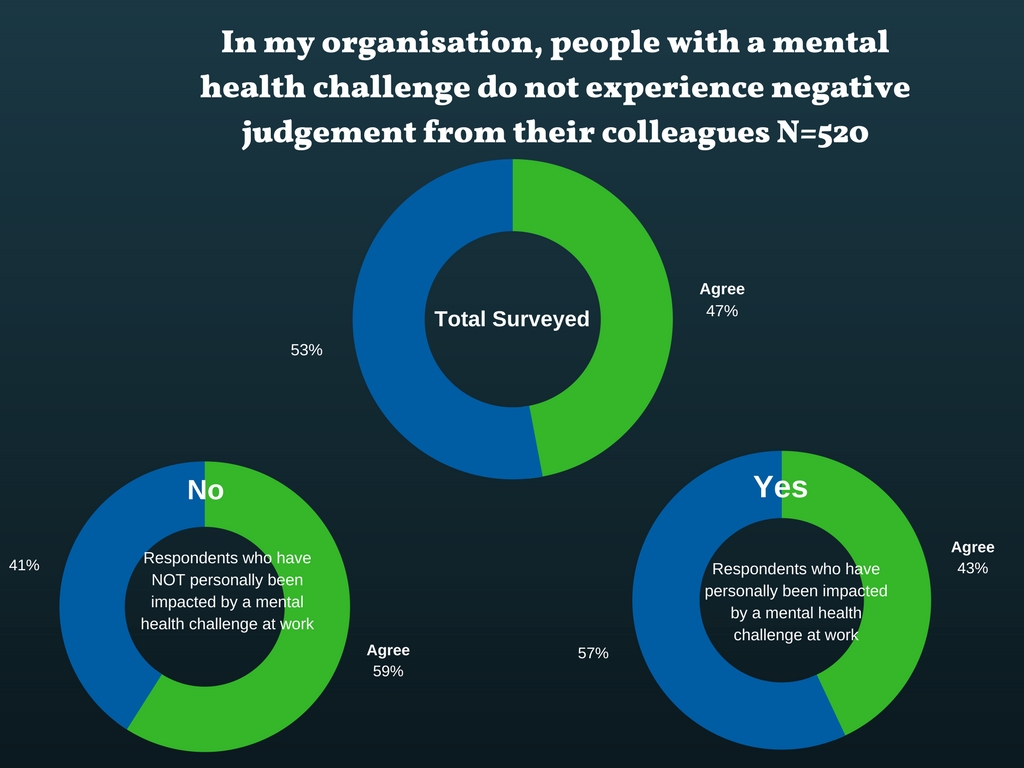 Only 43 % of those who have had a mental health challenge at work believe they would not be judged negatively, compared to 59% who haven’t.

At the heart of any issue regarding mental distress is how comfortable we would feel discussing it with our manager if it was affecting our work.

Overall 48% would feel comfortable discussing their challenge to a manager, with 51% of employees at smaller employers comfortable, compared to 46% for larger employers.

Is there any difference in attitude between the perception of those who have actually had a mental health challenge at work and those who haven’t?

Only 45% of those who have had a mental health challenge at work would feel comfortable discussing it with their manager, compared to 56% who haven’t.

How is the culture of large organisations compared to small?

Once again it appears that smaller (less than 100 employees) have a more supportive environment, with 59% compared to 51% for larger organisations.

Is there a difference in perception between those who have had a mental health challenge at work?

Once again there is a large distinction between the perceptions of those who have experienced mental illness directly (41% agree) versus those who haven’t (63%).

There is no doubt that a mentally healthy culture is highly valued by employees, and yet one of the biggest inhibitors is that people don’t feel comfortable discussing why it is important. This is despite all of us knowing someone close to us that struggles with mental distress. It also appears that larger companies (who ironically have access to more resources) have a greater level of stigma. When we know that mental distress is the largest contributor to lost productivity – Houston we have a problem.

If you are an organisation that would like to do something to improve this situation:

Let’s face it, work has been very challenging for many of us in the last year. Recent ...
END_OF_DOCUMENT_TOKEN_TO_BE_REPLACED
News

Uncertainty can cause more stress than actual pain. Science tells us that we humans are ...
END_OF_DOCUMENT_TOKEN_TO_BE_REPLACED
News

These are the top 5 things leaders should focus on to prevent employee burnout (Gallup ...
END_OF_DOCUMENT_TOKEN_TO_BE_REPLACED
News

Do you think your team members would like to work in the office, work from home, or work ...
END_OF_DOCUMENT_TOKEN_TO_BE_REPLACED
News

In 1976, Professor Carlo Cipolla, an economics professor at the University of California ...
END_OF_DOCUMENT_TOKEN_TO_BE_REPLACED
General

Our Federal Parliament has been inundated with graphic accounts of misogyny, sexual ...
END_OF_DOCUMENT_TOKEN_TO_BE_REPLACED
General

I recently visited beautiful Forster, on the NSW mid-north coast. Having grown up in Taree...
END_OF_DOCUMENT_TOKEN_TO_BE_REPLACED
News

Do you consider yourself to be a caring leader? Self-care and caring for others in your ...
END_OF_DOCUMENT_TOKEN_TO_BE_REPLACED
News

Asking R U OK? can be scary. What if the other person replies with a “No”. ...
END_OF_DOCUMENT_TOKEN_TO_BE_REPLACED