Knowing 40% of doctors are burnt out, should worry us all 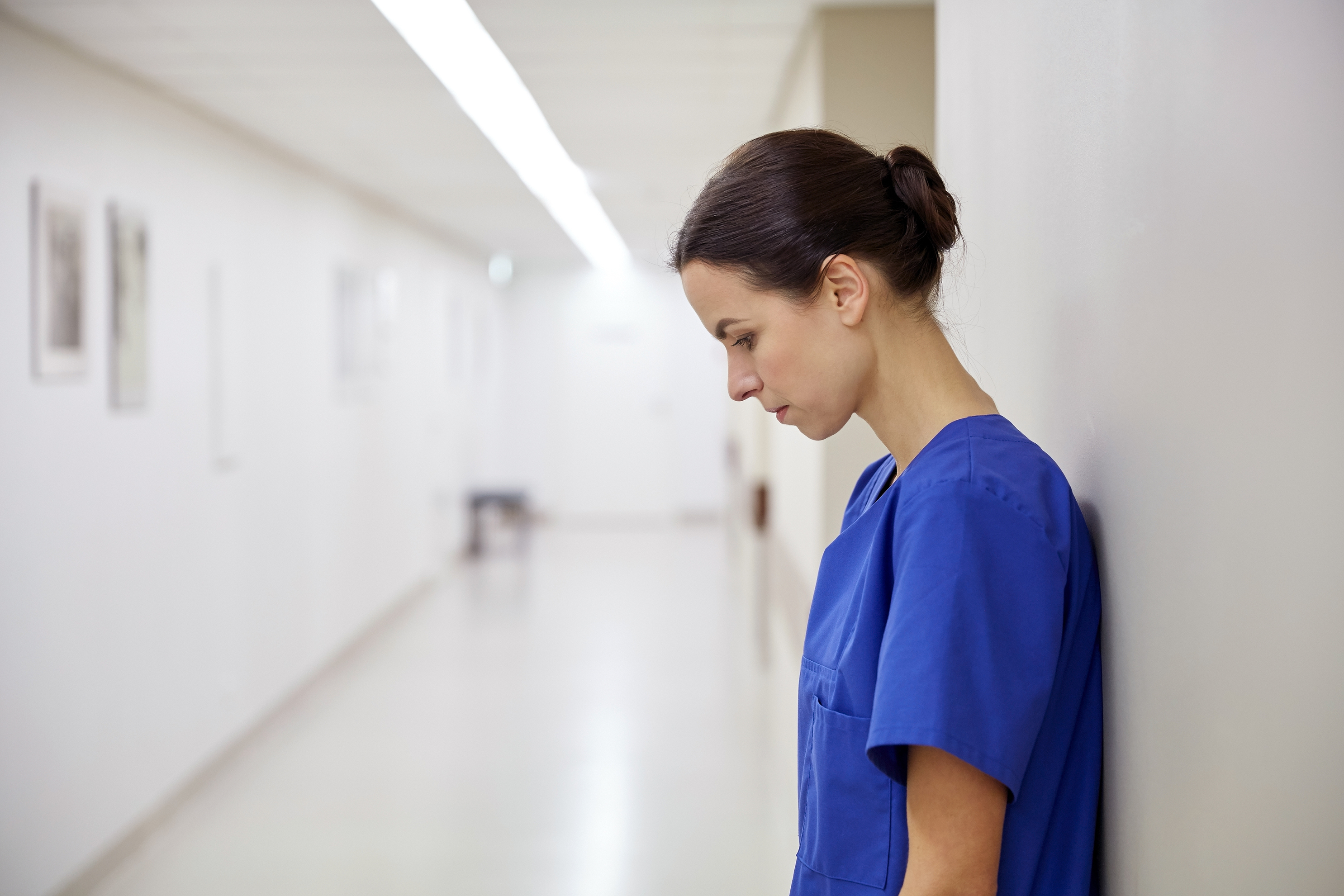 In findings just released this week, more than 40% of doctors—and 50% of female doctors—are burned out, according to Medscape’s 2019 research.

Every Australian should be horrified by this. Having a son about to graduate from medical school, I am very angry.

Although this is USA research, as I reveal below – Australian research and anecdotes, suggest a similar crisis.

The 5 engagement factors most tied to burnout

The Medscape research shows five engagement factors that were negatively correlated with burnout. This meant that those who responded affirmatively to the follow statements were significantly less likely to score highly on the Burnout Index. These included:

While this correlation doesn’t imply causation, these findings indicate that if doctors believe their organization listens to them, communicates effectively with them, and takes actions in line with their priorities—they are happier with their work.

Surely Australia is better than this!

In beyondblue’s 2013 (that was the latest I could find) National Mental Health Survey of Doctors and Medical Students, they found that medical students and young or female doctors are most at risk, and identified that significant levels of stigma towards people with mental health problems.

So, have things got better in Australia since 2013?

As reported in the ABC online in March 2019, over half of doctors are working rosters that put them at significant or high risk of fatigue, according to a 2016 AMA study.

The average doctor’s work week was 78 hours with the average shift lasting 18 hours. One doctor did a 76-hour shift.

“I have a sneaking suspicion I was the doctor who did the 76-hour shift and recorded 118 hours per week in terms of workload,” Dr Jason Lam told The Drum. Dr Lam was considering suicide but postponed getting help because he feared being caught up in the mandatory reporting process.

“We were working crazy hours, I was on call for an entire year.”

Yet medical graduates say they dare not complain with an oversupply of graduates competing for training positions.

A recent survey of 1351 doctors-in-training found 65 per cent were worried their fatigue could lead to clinical error.

“At one of my jobs where I made the foolish mistake of putting down my [long] hours I got quietly taken aside and the consultants would say to you, ‘I’m not telling you to work these hours but if you don’t, people will suffer’,” said Dr Lam.

At one clinic orientation he said he was told: “You have three chances with me, if you displease me three times, I will call all the relevant people and make sure you never work in this specialty again”.

“We’re reliant on these consultants to give us references,” he said.

Sadly, this leads to all too many suicides. And, what about those who can help doctors in distress?

The “psychiatric breakdown of the public system” is driving away overburdened psychiatrists who were dedicated to treating some of the most vulnerable mentally ill patients, UNSW Scientia Professor Gordon Parker says.

The hospital psychiatrist and founder of the Black Dog Institute is calling for urgent reforms to arrest “the slow death in quality” in public psychiatric care.

“The tipping point has been passed,” Professor Parker said. “The system has been under threat of deterioration in quality and sophistication of care for several years.

The journalist was told that multiple senior psychiatrists have resigned or are planning to resign from a handful of Sydney psychiatric units within the year.

Other specialties have a shortage of training positions for their oversupply of trainee doctors. But psychiatry is struggling to fill positions with their demanding and unrewarding workloads.

“Trainees are rapidly falling away,” he said. “This is a canary in the coal mine signal.”

How can doctors support distressed patients, if they are distressed themselves

In Australia, the most common first point of contact when seeking help from psychological distress is a GP. What chance have they got of offering holistic, practical steps forward, if as a group they are also struggling.

So, what are the solutions?

First, admit there is a crisis.

Secondly, commission research to identify the root cause of the issues.

Third, do something. Invest in solutions.

Medscape research recommended the following, via the infographic below. 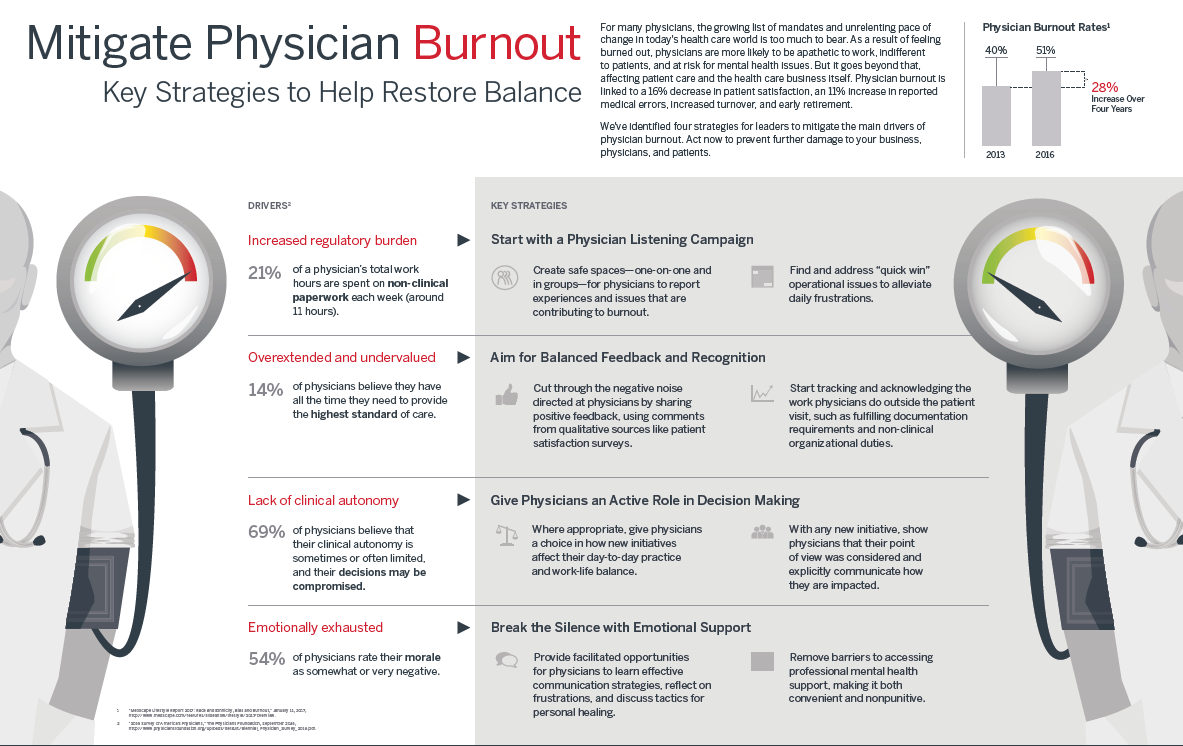 The recommendations to Mitigate Physician Burnout include:

I don’t want my son, or his peers, working in a culture like this. It has to change.

Let’s face it, work has been very challenging for many of us in the last year. Recent ...
END_OF_DOCUMENT_TOKEN_TO_BE_REPLACED
News

Uncertainty can cause more stress than actual pain. Science tells us that we humans are ...
END_OF_DOCUMENT_TOKEN_TO_BE_REPLACED
News

These are the top 5 things leaders should focus on to prevent employee burnout (Gallup ...
END_OF_DOCUMENT_TOKEN_TO_BE_REPLACED
News

Do you think your team members would like to work in the office, work from home, or work ...
END_OF_DOCUMENT_TOKEN_TO_BE_REPLACED
News

In 1976, Professor Carlo Cipolla, an economics professor at the University of California ...
END_OF_DOCUMENT_TOKEN_TO_BE_REPLACED
General

Our Federal Parliament has been inundated with graphic accounts of misogyny, sexual ...
END_OF_DOCUMENT_TOKEN_TO_BE_REPLACED
General

I recently visited beautiful Forster, on the NSW mid-north coast. Having grown up in Taree...
END_OF_DOCUMENT_TOKEN_TO_BE_REPLACED
News

Do you consider yourself to be a caring leader? Self-care and caring for others in your ...
END_OF_DOCUMENT_TOKEN_TO_BE_REPLACED
News

Asking R U OK? can be scary. What if the other person replies with a “No”. ...
END_OF_DOCUMENT_TOKEN_TO_BE_REPLACED